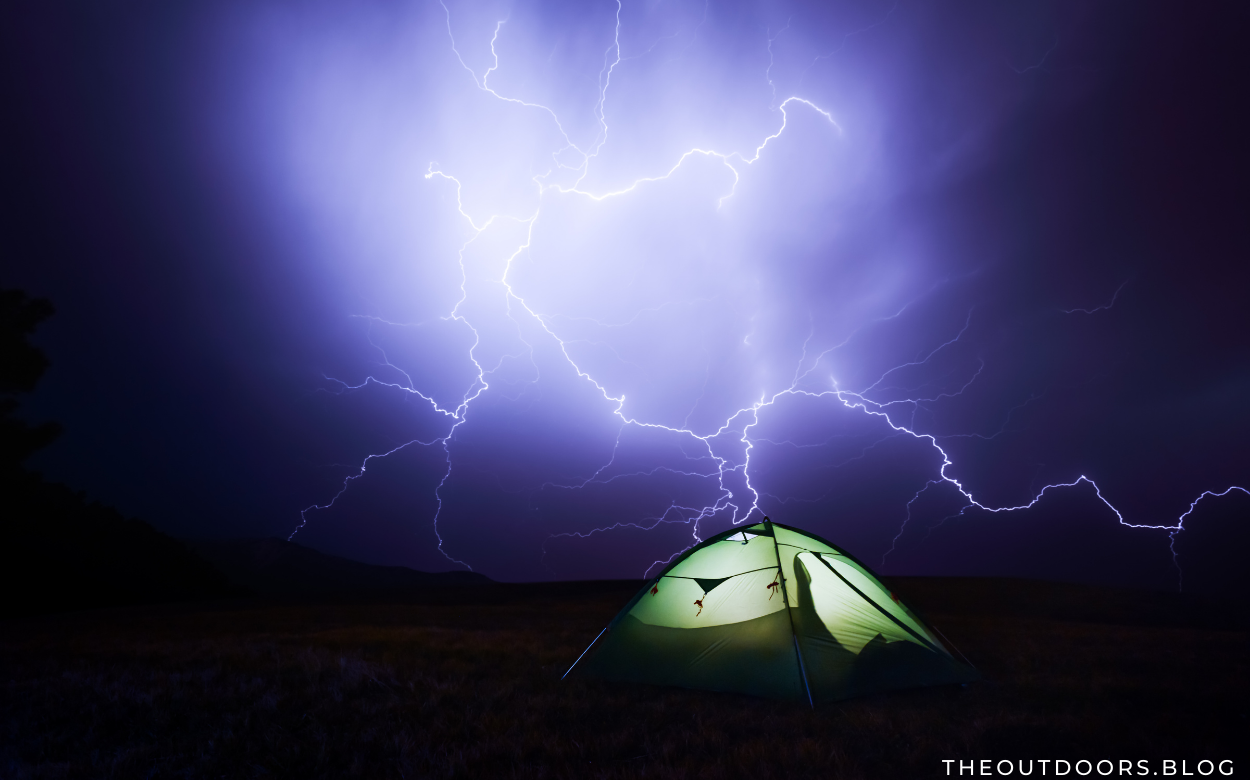 So, I did a quick bit of research and found that the tent itself won’t attract lightning, but where you pitch your tent can have a considerable effect. Doing a little more digging, I found some helpful advice on avoiding being hit by lightning while camping.

Avoid Camping in a Storm

The best advice is to not camp in a thunderstorm, but of course, that’s not always an option. If you are out hiking, then you may not have the choice, so what should we consider when camping in a thunderstorm?

The only thing likely to be made of metal on your tent is the poles that hold it up. That said, the majority of tent poles are now either carbon fiber or fiberglass. So should you be worried if your tent poles are metal? No, not really, since there is only a tiny amount of metal in the poles, and there is bound to be something nearby that is taller than your tent.

Also Read:  The 10 Best Water Purification Bottles for Hiking and Camping of 2021

I wondered if tent design can affect how likely it is to be struck by lightning. Other than metal poles, it doesn’t seem to make any difference. Although some design work has been carried out on lightning-proof tents, the design is still in its early stages and has some flaws.

The most crucial factor that will affect your possibility of being struck by lightning while camping is your location. First, avoid the high ground. Try and find a spot where you are not the highest point around.

Avoid tall trees, as they are often hit by lightning. Not only can lightning set fire to a tree, but it can also bring the tree down, so it’s very dangerous to be near them during a storm.

Some Tips if you are Caught in a Lightning Storm

Lightning is trying to find the easiest way to earth, so you need to minimize your contact with the ground. You can sit on your backpack to isolate yourself from the ground, for example. Put your boots on so that your feet are also insulated.

If there are caves nearby, these could be a good option for shelter. Large open caves are much better than small caves, as lightning can penetrate a small cave and make contact with the ground inside. You don’t want to be inside that cave!

Spread out if there is a group of you. If you huddle together, the lightning can strike one person but jump to others that are nearby.

If at all possible, don’t camp in a thunderstorm. Either postpone your trip, find somewhere safe like a large cave, or if you can find a building, go inside.

The Outdoors Blog is reader-supported. When you buy through links on our site we may earn an affiliate commission. Learn More.

Theoutdoors.blog is a participant in the Amazon Services LLC Associates Program, an affiliate advertising program designed to provide a means for sites to earn advertising fees by advertising and linking to products on amazon.com.